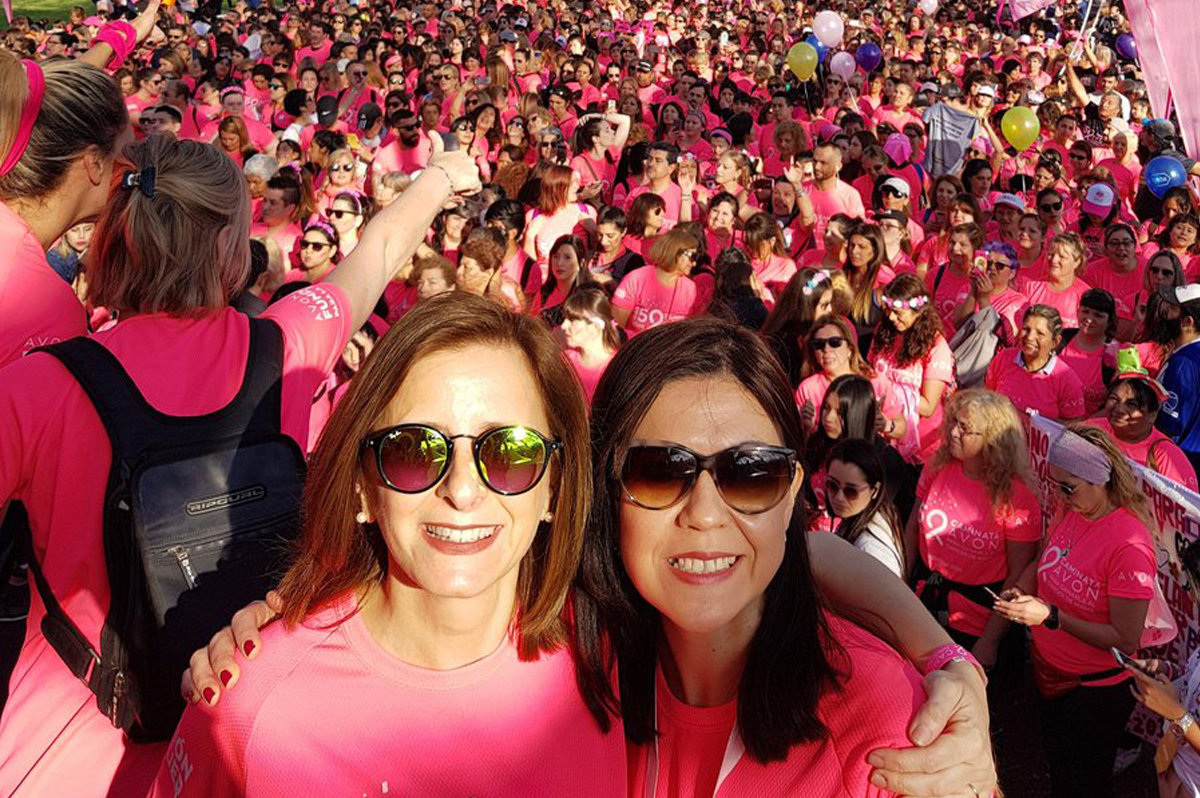 October 2019 marked Avon’s 27th year of support for Breast Cancer Awareness Month (BCAM). Hundreds of thousands of people took part in BCAM events supported by Avon, from concerts to bake sales. 3.3 million miles worldwide were covered in Avon walks and runs to support BCAM, and 2.3 million products were sold to raise funds for breast cancer charities.
Avon’s campaign this year focused on the need to #TakeABreastBreak, taking the time for a self-exam or a mammogram. To promote breast health awareness Avon undertook initiatives across the world with its employees, Representatives and customers.
In South Africa, 20,000 women joined the iThemba Walkathon. The event was featured in national news, including a live broadcast from the event. Through Avon Justine’s partnerships with local organisations, around 15,000 women have been able to access information, support and clinical breast examinations in the months leading up to BCAM.
The Avon Walk Argentina in Buenos Aires welcomed 15,000 participants, and sales zone leaders organised walks all over the country. In 1999, Avon Argentina donated a van providing free mammograms to a local cancer organisation, aimed at women who otherwise would not be able to access them. Since then, the van has visited over 500 towns and cities, and has carried out over 150,000 mammograms.
Avon Poland launched their Day for U campaign – raising awareness of women’s right to take a day off for a mammogram – as well as co-funding 10,000 ultrasounds. To mark the campaign, the female host of a morning TV show was absent for one day as she had taken a Day for U. Avon Representatives as well as dozens of influencers disappeared from their social media channels for one day and two well-known singers in Poland – Justyna Święs and Andrzej Smolik – took part in a video highlighting the importance of Day for U.
The Pink Light Night Run & Walk 2019 in Manila, Philippines, invited runners to become their own pink light. 5,000 runners and walkers took part. The run ended with a pink Holi festival punctuating a night to remember, not just as a fun way to stay healthy, but also to shower the city with a celebration of life, love and fighting breast cancer one pink light at a time together.
Over the last 25 years, Avon and the Avon Foundation for Women have donated more than $800 million USD to breast cancer causes, and educated 180 million women about the disease, and funded breast health screening for nearly 20 million women. Recognising BCAM in October is a way to further increase fundraising and awareness of the disease, including its signs and symptoms.
Apply Now | Become an Avon Rep UK
Shop Avon Official | United Kingdom